Medical care and wellbeing of inmates is central to the Carmelite Prisoners’ Interest Organization (CAPIO). Through periodic outreaches and attention to specific cases whenever CAPIO is notified by Inmates or Correctional Officers, are the approaches adopted in cushioning Medicare gap for inmates in custody. Previous medical outreaches were reported in the last two quarters of 2021; however, peculiar medical needs warranted the need for more medical outreaches in the last quarter of 2021.

The attention of CAPIO was drawn to two inmates in Nsukka Custodial Centre -Onyeka and Ifeanyi- who needed urgent hydrocelectomy surgery. Given that the above procedure could not be performed in the Custodial centre, CAPIO engaged with the management of Bishop Shanahan Hospital Nsukka. Given this intervention, Ifeanyi and Onyeka were successfully operated on and have returned to custody. 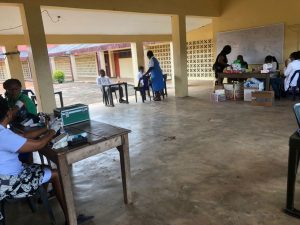 In the same vein, CAPIO medical outreach held on the 16th October 2021 in Oji Medium Security Custodial Centre. The team was well received by the Officer-in-Charge of the Centre, Mr Ojiakor Michael who kept the medical team company through the duration of the outreach. Every inmate with a medical condition was attended to. In expressing their appreciation, the Officer-in-Charge wrote CAPIO and acknowledged her contribution to medical and educational development of inmates in custody.

A subsequent medical outreach held in Enugu for optical care of inmates in Enugu Maximum Custodial Centre. Through the outreach, 20 inmates were attended to and treated.

The management and staff of the Carmelite Prisoners’ Interest Organization (CAPIO) remain grateful to our medical volunteers without whose professional expertise and sacrifice, it would have been difficult to reach inmates. We appreciate the management of Bishop Shanahan Hospital Nsukka who significantly reduced the operation cost of both patients. In a special way, we appreciate everyone who financially supported CAPIO Medical Outreaches.